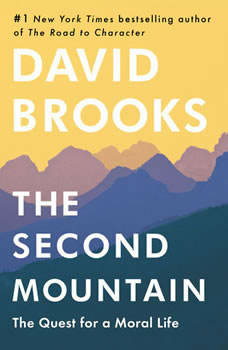 The Second Mountain: The Quest for a Moral Life

Everybody tells you to live for a cause larger than yourself, but how exactly do you do it? The bestselling author of The Road to Character explores what it takes to lead a meaningful life in a self-centered world.

Every so often, you meet people who radiate joy—who seem to know why they were put on this earth, who glow with a kind of inner light. Life, for these people, has often followed what we might think of as a two-mountain shape. They get out of school, they start a career, and they begin climbing the mountain they thought they were meant to climb. Their goals on this first mountain are the ones our culture endorses: to be a success, to make your mark, to experience personal happiness. But when they get to the top of that mountain, something happens. They look around and find the view . . . unsatisfying. They realize: This wasn’t my mountain after all. There’s another, bigger mountain out there that is actually my mountain.

And so they embark on a new journey. On the second mountain, life moves from self-centered to other-centered. They want the things that are truly worth wanting, not the things other people tell them to want. They embrace a life of interdependence, not independence. They surrender to a life of commitment.

In The Second Mountain, David Brooks explores the four commitments that define a life of meaning and purpose: to a spouse and family, to a vocation, to a philosophy or faith, and to a community. Our personal fulfillment depends on how well we choose and execute these commitments. Brooks looks at a range of people who have lived joyous, committed lives, and who have embraced the necessity and beauty of dependence. He gathers their wisdom on how to choose a partner, how to pick a vocation, how to live out a philosophy, and how we can begin to integrate our commitments into one overriding purpose.

In short, this book is meant to help us all lead more meaningful lives. But it’s also a provocative social commentary. We live in a society, Brooks argues, that celebrates freedom, that tells us to be true to ourselves, at the expense of surrendering to a cause, rooting ourselves in a neighborhood, binding ourselves to others by social solidarity and love. We have taken individualism to the extreme—and in the process we have torn the social fabric in a thousand different ways. The path to repair is through making deeper commitments. In The Second Mountain, Brooks shows what can happen when we put commitment-making at the center of our lives.

With unequaled insight and brio, David Brooks, the New York Times columnist and bestselling author of Bobos in Paradise, has long explored and explained the way we live. Now, with the intellectual curiosity and emotional wisdom that make his columns...

#1 NEW YORK TIMES BESTSELLER • David Brooks challenges us to rebalance the scales between the focus on external success—“résumé virtues”—and our core principles.   NAMED ONE OF THE BEST BOOKS OF THE ...

Malcolm Gladwell, host of the podcast Revisionist History and #1 bestselling author of The Tipping Point, Blink, Outliers, David and Goliath, and What the Dog Saw, offers a powerful examination of our interactions with strangers---and why they ofte...

The Triple Package
by Amy Chua

"That certain groups do much better in America than others—as measured by income, occupational status, test scores, and so on—is difficult to talk about. In large part this is because the topic feels racially charged. The irony is that t...

Bobos in Paradise
by David Brooks

It used to be pretty easy to distinguish between the bourgeois world of capitalism and the bohemian counterculture. The bourgeois worked for corporations, wore gray, and went to church. The bohemians were artists and intellectuals. Bohemians champio...

In Rule Makers, Rule Breakers celebrated cultural psychologist Michele Gelfand takes us on an epic journey through human cultures, offering a startling new view of the world and ourselves. With a mix of brilliantly conceived studies and surprising o...

The Power of Human
by Adam Waytz

Empathy is credited as a factor in improved relationships and even better product development. But while it's easy to say "just put yourself in someone else's shoes," the reality is that understanding the motivations and emotions of others often pro...

The Death of Right and Wrong
by Tammy Bruce

If you believe children should be seduced into warped sexual behavior by the Gay Elite, if you think confessed murderers should be set free by defense attorneys who know how to wield the race card, if you feel promiscuous gay men should be empowered...

The Death of Right and Wrong
by Tammy Bruce

If you believe children should be seduced into warped sexual behavior by the Gay Elite, if you think confessed murderers should be set free by defense attorneys who know how to wield the race card, if you feel promiscuous gay men should be empowered...