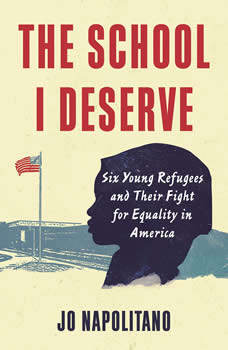 The School I Deserve: Six Young Refugees and Their Fight for Equality in America

Journalist Jo Napolitano, a two- time Pulitzer Prize nominee, delves into the landmark ACLU case in which the School District of Lancaster, Pennsylvania was sued for refusing to admit older, non-English speaking refugees and sending them to a high-discipline alternative school. Six refugee students fought alongside the ACLU to demand equal access to education. One of the students, eighteen-year-old Khadidja Issa, fled the horrific violence in war-torn Sudan with the hope of a safer life in the United States where she could have access to an education. Instead, she was barred from enrollment by the School District of Lancaster and admitted to Phoenix Academy---a for-profit alternative school with multiple abuse allegations where students were subjected to daily pat-downs and random searches. Napolitano follows Khadidja as she bravely decides to join the ACLU's lawsuit as the plaintiff in the ISSA vs. The School District of Lancaster case. The fiery week-long showdown between the ACLU and the school district was ultimately decided by a conservative Republican judge who, to everyone's surprise, ruled in favor of the refugees. The School I Deserve sheds light upon the lack of support immigrant and refugee children face in our education system and presents a hopeful future where all children can receive an equal education regardless of race, ethnicity, or their country of origin.