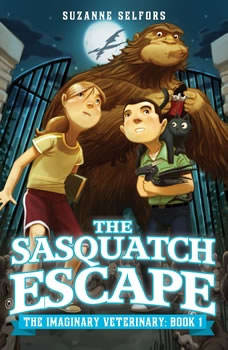 When Ben Silverstein is sent to the rundown town of Buttonville to spend the summer with his grandfather, he's certain it will be the most boring vacation ever. That is, until his grandfatherA¹s cat brings home what looks like . . . a baby dragon?Enter Pearl Petal, a local girl with an eye for adventure, who helps Ben take the wounded dragon to the only veterinarian in town -- the mysterious Dr. Woo. No one knows where Dr. Woo came from or why she's moved into the old button factory and renamed it Dr. Woo's Worm Hospital. But as Ben and Pearl discover once they are inside, Dr. Woo's isn't a worm hospital at all -- it's actually a secret hospital for Imaginary Creatures.After Ben accidentally leaves the hospital's front door unlocked, a rather large, rather stinky, and very hairy beast escapes into Buttonville. Ben and Pearl are tasked with retrieving the runaway creature, and what started out as the most boring vacation ever becomes the story of a lifetime.In this irresistible new series, Suzanne Selfors takes listeners on a wild journey filled with mythical creatures and zany adventures that are anything but imaginary.

Bestselling author Alice Hoffman’s bewitching Nightbird is perfect for ages 10-13: love and friendship empower a lonely girl to embrace her uniqueness and discover her strengths.  Twig lives in Sidwell, where people whisper that...

The Dragon in the Sock Drawer
by Kate Klimo

For Magic Tree House readers who are ready for something longer, the Dragon Keepers series has the perfect length and reading level, along with the fast-paced writing, adventure, and sense of teamwork that kids love to read.Ten-year-old cousins Jess...