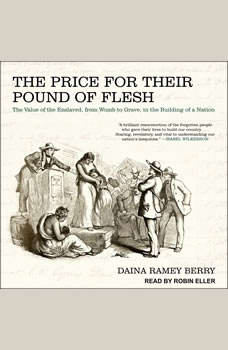 The Price for Their Pound of Flesh: The Value of the Enslaved, from Womb to Grave, in the Building of a Nation

The Price for Their Pound of Flesh is the first book to explore the economic value of enslaved people through every phase of their lives—including preconception, infancy, childhood, adolescence, adulthood, the senior years, and death—in the early American domestic slave trade. Covering the full "life cycle," historian Daina Ramey Berry shows the lengths to which enslavers would go to maximize profits and protect their investments. Illuminating "ghost values" or the prices placed on dead enslaved people, Berry explores the little-known domestic cadaver trade and traces the illicit sales of dead bodies to medical schools. Writing with sensitivity and depth, Berry resurrects the voices of the enslaved and provides a rare window into enslaved peoples' experiences and thoughts, revealing how enslaved people recalled and responded to being appraised, bartered, and sold throughout the course of their lives.

Dawn of Detroit
by Tiya Miles

Most Americans believe that slavery was a creature of the South, and that Northern states and territories provided stops on the Underground Railroad for fugitive slaves on their way to Canada. In this paradigm-shifting book, celebrated historian Tiy...

Snow-Storm in August
by Jefferson Morley

Editor and investigative reporter Jefferson Morley has been widely published in national periodicals and is the author of the critically acclaimed nonfiction work Our Man in Mexico. An eye-opening look at Washington’s first race riot, Snow-Sto...

Not For Sale
by David Batstone

“Human trafficking is not an issue of the left or right, blue states or red states, but a great moral tragedy we can unite to stop . . . Not for Sale is a must-read to see how you can join the fight.” —Jim Wallis, author of God's ...

The story of the Confederate States of America, the proslavery, antidemocratic nation created by white Southern slaveholders to protect their property, has been told many times in heroic and martial narratives. Now, however, Stephanie McCurry tells ...

A Slave No More
by David W. Blight

Slave narratives are extremely rare. Of the one hundred or so of these testimonies that survive, a mere handful are first-person accounts by slaves who ran away and freed themselves. Now two newly uncovered narratives, and the biographies of the men...

A Slave No More
by David W. Blight

Slave narratives are extremely rare. Of the one hundred or so of these testimonies that survive, a mere handful are first-person accounts by slaves who ran away and freed themselves. Now two newly uncovered narratives, and the biographies of the men...

In a work that fundamentally recasts the history of colonial America, Wendy Warren shows how the institution of slavery was inexorably linked with the first century of English colonization of New England. While most histories of slavery in early Ame...

Soul by Soul
by Walter Johnson

Soul by Soul tells the story of slavery in antebellum America by moving away from the cotton plantations and into the slave market itself, the heart of the domestic slave trade. Taking us inside the New Orleans slave market, the largest in the natio...