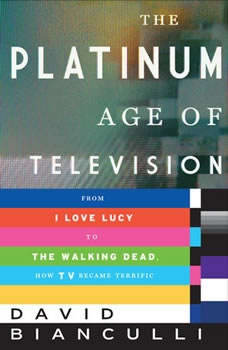 The Platinum Age of Television: From I Love Lucy to The Walking Dead, How TV Became Terrific

Television shows have now eclipsed films as the premier form of visual narrative art of our time. This new book by one of our finest critics explains—historically, in depth, and with interviews with the celebrated creators themselves—how the art of must-see/binge-watch television evolved.

Darwin had his theory of evolution, and David Bianculli has his. Bianculli's theory has to do with the concept of quality television: what it is and, crucially, how it got that way. In tracing the evolutionary history of our progress toward a Platinum Age of Television—our age, the era of The Sopranos and Breaking Bad and Mad Men and The Wire and Homeland and Girls—he focuses on the development of the classic TV genres, among them the sitcom, the crime show, the miniseries, the soap opera, the western, the animated series and the late night talk show. In each genre, he selects five key examples of the form, tracing its continuities and its dramatic departures and drawing on exclusive and in-depth interviews with many of the most famed auteurs in television history.

Television has triumphantly come of age artistically; David Bianculli's book is the first to date to examine, in depth and in detail and with a keen critical and historical sense, how this inspiring development came about.