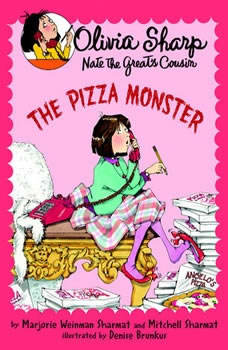 "I, Nate the Great, have something to say. My cousin Olivia Sharp is almost (but not quite) the world's best detective. I solve mysteries. She's an agent for secrets. You won't forget Olivia. She won't let you.

Meet Olivia Sharp. She's bold. She's eager to help people. She's a special kind of detective. She's an agent for secrets. Duncan is Olivia's first case. He believes that the world is coming to an end. And he wants her help. So Olivia puts on her feather boa. Her driver brings the limo. Soon enough, Olivia knows just what to do. But how will fifty pizzas make Duncan happy?

Get 5% off your total order by adding 3 or more audiobooks from Olivia Sharp: Agent for Secrets