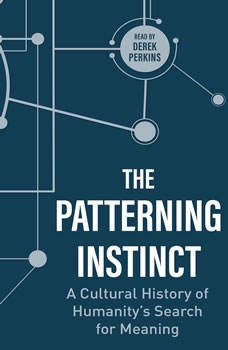 The Patterning Instinct: A Cultural History of Humanitys Search for Meaning

This fresh perspective on crucial questions of history identifies the root metaphors that cultures have used to construct meaning in their world. It offers a glimpse into the minds of a vast range of different peoples: early hunter-gatherers and farmers, ancient Egyptians, traditional Chinese sages, the founders of Christianity, trailblazers of the Scientific Revolution, and those who constructed our modern consumer society.Taking the reader on an archaeological exploration of the mind, the author, an entrepreneur and sustainability leader, uses recent findings in cognitive science and systems theory to reveal the hidden layers of values that form todays cultural norms. Uprooting the tired clichs of the science-religion debate, he shows how medieval Christian rationalism acted as an incubator for scientific thought, which in turn shaped our modern vision of the conquest of nature. The author probes our current crisis of unsustainability and argues that it is not an inevitable result of human nature but is culturally driven: a product of particular mental patterns that could conceivably be reshaped. By shining a light on our possible futures, the book foresees a coming struggle between two contrasting views of humanity: one driving to a technological endgame of artificially enhanced humans, the other enabling a sustainable future arising from our intrinsic connectedness with each other and the natural world. This struggle, it concludes, is one in which each of us will play a role through the meaning we choose to forge from the lives we lead.

Most of us take for granted the features of our modern society, from air travel and telecommunications to literacy and obesity. Yet for nearly all of its six million years of existence, human society had none of these things. While the gulf that div...

The New York Times bestselling coauthor of Sex at Dawn explores the ways in which “progress” has perverted the way we live: how we eat, learn, feel, mate, parent, communicate, work, and die.Most of us have instinctive evidence the world ...

Daniel Everett, then a Christian missionary, arrived among the Piraha in 1977—with his wife and three young children—intending to convert them. What he found was a language that defies all existing linguistic theories and reflects a way ...

A sharp-witted knockdown of America's love affair with positive thinking and an urgent call for a new commitment to realismAmericans are a "positive" people—cheerful, optimistic, and upbeat: this is our reputation as well as our self-image. Bu...

“An in-depth and compelling account of diverse Americans living off the grid.” —Los Angeles TimesThe radical search for the simple life in today’s America. On a frigid April night, a classically trained opera singer, five mon...

This new book by Spencer Wells, the internationally known geneticist, anthropologist, author, and director of the Genographic Project, focuses on the seminal event in human history: mankind's decision to become farmers rather than hunter-gatherers. ...

From bestselling writer David Graeber, a powerful argument against the rise of meaningless, unfulfilling jobs, and their consequences.Does your job make a meaningful contribution to the world? In the spring of 2013, David Graeber asked this question...

Who changed the sex of God? This groundbreaking book proposes that the rise of alphabetic literacy reconfigured the human brain and brought about profound changes in history, religion, and gender relations. Making remarkable connections across brai...

The maestro storyteller and reporter provocatively argues that what we think we know about speech and human evolution is wrong. "A whooping, joy-filled and hyperbolic raid on, of all things, the theory of evolution." (Dwight Garner, New York Times...