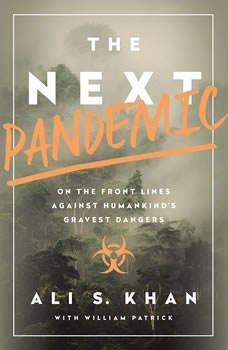 The Next Pandemic: On the Front Lines Against Humankind's Gravest Dangers

An inside account of the fight to contain the world's deadliest diseases-and the panic and corruption that make them worseThroughout history, humankind's biggest killers have been infectious diseases: the Black Death, the Spanish Flu, and AIDS alone account for over one hundred million deaths. We ignore this reality most of the time, but when a new threat-Ebola, SARS, Zika-seems imminent, we send our best and bravest doctors to contain it. People like Dr. Ali S. Khan.In his long career as a public health first responder-protected by a thin mask from infected patients, napping under nets to keep out scorpions, making life-and-death decisions on limited, suspect information-Khan has found that rogue microbes will always be a problem, but outbreaks are often caused by people. We make mistakes, politicize emergencies, and, too often, fail to imagine the consequences of our actions.The Next Pandemic is a firsthand account of disasters like anthrax, bird flu, and others-and how we could do more to prevent their return. It is both a gripping story of our brushes with fate and an urgent lesson on how we can keep ourselves safe from the inevitable next pandemic.