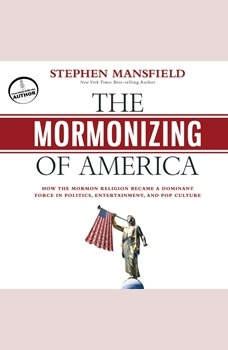 The Mormonizing of America: How the Mormon Religion Became a Dominant Force in Politics, Entertainment, and Pop Culture

What the Mormonizing of America means for the nation, the world&#8212;and for you. A century ago, there was one Mormon celebrity in the United States&#8212;a member of Congress so controversial, his confirmation hearing lasted four years. The Latter-day Saints&#8217; practice of polygamy had ended only a decade or so before. Mormons were a despised sect with almost no standing or credibility in American culture. Today, Mormons number in the millions. Their members include some of the most prominent people in the world: the Marriott family; Stephen Covey; Mitt Romney; Glenn Beck; the Osmonds; Stephenie Meyer, author of the best-selling Twilight vampire novels; David Neeleman, founder of JetBlue; and more than a dozen members of Congress. In The Mormonizing of America, New York Times best-selling author Stephen Mansfield tells the story of the faith that has become one of the country&#8217;s most influential religions and how it has ascended to astonishing power in American society. In his fair and thought-provoking way, he also unveils what Mormons believe and why it matters for America, the world&#8212;and for you.

What Does the Bible Really Teach abou...
by Kevin DeYoung

Not on My Watch
by Elizabeth Johnston