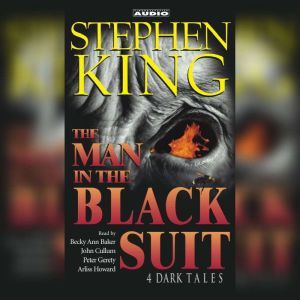 The Man in the Black Suit: 4 Dark Tales

Set in the fictional town of Castle Rock, Maine An intense, eerie, and instantly compelling collection of unabridged stories from Stephen King!"The face of the man in the black suit grows ever clearer, ever closer, and I remember every word he said. I don't want to think of him, but I can't help it, and sometimes at night my old heart beats so hard and so fast I think it will tear itself right clear of my chest." A haunting recollection of a mysterious boyhood event, The Man in Black Suit read by John Cullum, leads off this masterful collection from Stephen King. Other dark tales include: All That You Love Will Be Carried Away read by Peter Gerety, in which a man checks into a Lincoln, Nebraska Motel 6 to find meaning in his life; That Feeling, You Can Only Say What It Is in French read by Becky Ann Baker presents the ultimate case of déjà vu; and The Death of Jack Hamilton read by Arliss Howard—a blistering tale of Depression-era outlaws on the run. Whether about encounters with the dead, the near dead, or about the mundane drudgery of life—Stephen King's The Man In The Black Suit: Four Dark Tales is not to be missed.