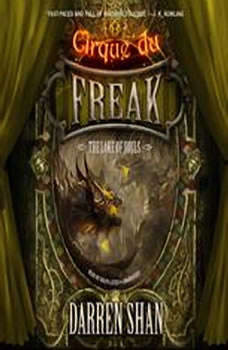 The Lake of Souls

"If you step through after Harkat, you might never come back. Is your friend worth such an enormous risk?" It's time for Harkat to learn the truth about who he used to be. Darren and Harkat face monstrous obstacles on their desperate quest to the Lake of Souls. Will they survive the savage journey full of killer animals, monstrous mutants, and fiery winged beasts? And what awaits them in the murky waters of the dead? The two companions must unravel the riddle of Harkat's identity before they are destroyed. Be careful what you fish for.

Get 5% off your total order by adding 3 or more audiobooks from Cirque du Freak: The Saga of Darren Shan

The Lake of Souls
Cirque du Freak: The Saga of Darren...

Allies of the Night
Cirque du Freak: The Saga of Darren...

Killers of the Dawn
Cirque du Freak: The Saga of Darren...