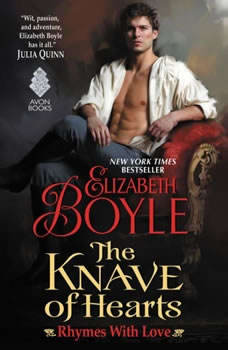 The Knave of Hearts: Rhymes With Love

In the fifth novel of the captivating Rhymes With Love series from New York Times bestselling author Elizabeth Boyle, a young woman's hopes of a match encounter a wickedly handsome complication . . .Lavinia Tempest has been eagerly anticipating a spectacular season. But one disastrous pile-up on the Almack's dance floor derails all her plans. Add to that, the very stunning revelations about her mother's scandalous past have become the ton's latest on dits. Lavinia's future has gone from shining bright to blackest night in one misstep.Alaster "Tuck" Rowland admits he's partly to blame for Lavinia's disastrous debut. But it's not guilt that compels him to restore her reputation. Rather, he's placed a wager that he can make Lavinia into one of the most sought-after ladies in London. Who better than an unrepentant rake to set society astir?Tuck's motives are hardly noble. But in teaching the lovely Lavinia how to win any man she wants, he suddenly finds himself tangled in the last place he ever imagined: in love.

Along Came a Duke
by Elizabeth Boyle

“Wit, passion, and adventure, Elizabeth Boyle has it all!”—Julia QuinnNew York Times bestselling RITA® Award winner Elizabeth Boyle is a wonder, and with Along Came a Duke—the first book in her delectable Rhymes with Lo...

In the sixth novel of the enchanting Rhymes With Love series from New York Times bestselling author Elizabeth Boyle, a nobleman falls in love with a beautiful spy he must protect… Lord Rimswell is a man of honor and absolutes. If he says...

Rules to Catch a Devilish Duke
by Suzanne Enoch

Sophia White knows she will never marry into polite society. The illegitimate daughter of a nobleman, she works at the Tantalus Club, a discreet establishment for gentlemen—and her only suitor is a pastor who wants to save her soul. So when So...