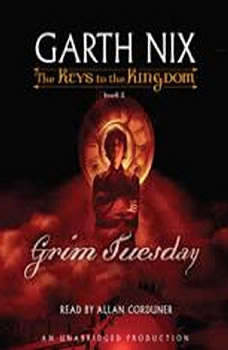 The Keys to the Kingdom #2: Grim Tuesday

Series: The Keys to the Kingdom #2

The second remarkable installment in The Keys to the Kingdom, from spellbinding bestseller Garth Nix.

Seven days. Seven keys. Seven virtues. Seven sins. One mysterious house is the doorway to a very mysterious world--where one boy is about to venture and unlock a number of fantastical secrets.

Arthur doesn't think he will ever have to return to the strange house that nearly killed him on Monday--the house that contains an entire world. But Tuesday brings new challenges--in the form of an enemy named Grim Tuesday, who threatens the well-being of both Arthur's family and his world. Arthur must retrieve the Second Key from Grim Tuesday in order to save everything--an adventure that will include stealing a Sunship, surviving a very weird work camp, befriending a bear-like spirit, fighting the void-like Nithlings, and traveling in the scary Far Reaches for the ultimate showdown.

The Keys to the Kingdom Bundle