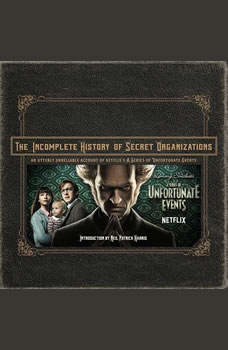 The Incomplete History of Secret Organizations: An Utterly Unreliable Account of Netflix's A Series of Unfortunate Events

This mysterious illustrated tie-in to Netflix's award-winning A Series of Unfortunate Events--featuring an introduction by Count Olaf's legal representative, Neil Patrick Harris--shares insider secrets about the Baudelaire family and the making of the show. In every library there is a single book that can answer the question that burns like a fire in the mind...In this collector's companion you will discover never-before-seen photographs, never-before-told stories, and never-before, revealed secrets spanning all three seasons of the hilariously twisted, critically acclaimed hit series. You will encounter original concept art, annotated script excerpts, and interviews with the creative team and all-star cast, as well as glossaries, recipes, lyric sheets, hidden Easter eggs, shocking backstories, and suspicious pages from the titular tome, unredacted, and revealed here for the first time.Featuring interviews with: Tony HaleDaniel HandlerAasif MandviSara RueBarry SonnenfeldPatrick WarburtonBo WelchAlfre Woodardand more...Perhaps you are wondering how a noble person such as yourself might become a member of a secret organization. Like so many things in life, it starts by picking up the right book. So go ahead, read at your own risk.

The definitive oral history of the iconic and beloved TV show The Wire, as told by the actors, writers, directors, and others involved in its creationSince its final episode aired in 2008, HBO's acclaimed crime drama The Wire has only become more po...

The Quest
by Daniel Yergin

This long-awaited successor to Daniel Yergin’s Pulitzer Prize-winning The Prize provides an essential, overarching narrative of global energy, the principal engine of geopolitical and economic changeA master storyteller as well as a ...

In celebration of The Simpsons thirtieth anniversary, the show’s longest-serving writer and producer offers a humorous look at the writing and making of the legendary Fox series that has become one of the most revered artistic achievements in...

I'll Be There for You: The One about Friends
by Kelsey Miller

An InStyle 10 Books You Won't Be Able to Put Down This OctoberSIX FRIENDS THAT BECAME A FAMILY.A TELEVISION SHOW THAT BECAME A PHENOMENON.Today, Friends is remembered as an icon of ’90s comedy and the Must See TV years. But when the series deb...

A lavish look at the real world--both the secret history and the behind-the-scenes drama--of the spellbinding Emmy Award-winning Masterpiece TV series Downton AbbeyApril 1912. The sun is rising behind Downton Abbey, a great and splendid house in a g...

Perfect for fans of Fresh Off the Boat’s situational humor and Jane the Virgin’s celebration of Latinidad, Definitely Hispanic is a collection of introspective memoiristic essays by social media influencer and viral phenomenon LeJuan Jam...

Matt Kramer, author and columnist for Wine Spectator, calls The New California Wine some of the most insightful wine writing you'll read anywhere, claiming it offers the real skinny on cutting-edge California wine. Hugh Johnson, the author of The Wo...