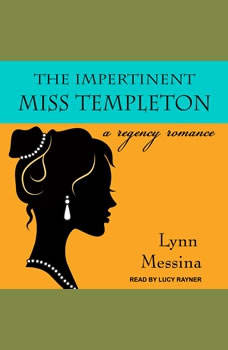 No, no, no! It doesn't matter how many times the Duchess of Trent (The Harlow Hoyden) requests her help with a delicate matter regarding a patent for her sister's invention, Tuppence Templeton will not lend a hand. She has a habit, yes, of coming up with ingenious plans to solve other people's problems, and it is true that she's clever and daring enough to pull off the proposed scheme. But there's no way she's going to confront the arrogant and dismissive Earl of Gage again. She is still shaken—or is it stirred?—from their last encounter when, rather than thank her for saving his sister from ruin, he railed against her for having the temerity to interfere in his family's business. And yet somehow when the opportunity arises, she finds herself unable to resist issuing the challenge. Nicholas Perceval, Earl of Gage, cannot believe it when the impertinent upstart who exposed his sister to disaster maneuvers him into escorting her to the Bill Patent Office. What a perfectly ridiculous request! And then to discover that she manipulated him while they were there so that she could "find" a missing application—he has never been so angry in his entire life. And it's not because he'd unexpectedly enjoyed her charming and irreverent company. No, that has nothing to do with it at all. Perhaps maybe a little . . .