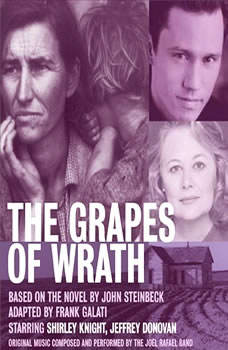 The Grapes of Wrath

A heart-wrenching full-cast adaptation of the Pulitzer Prize-winning novel by John Steinbeck, starring Jeffrey Donovan and Shirley Knight. Set during the Great Depression, The Grapes of Wrath tells the powerful story of the Joad familys trek from the dust bowl of Oklahoma to the promise of a new life in California. But what they find threatens to rip apart their lives, and sever the ties that bind them together. Starring Shirley Knight as Ma Joad, Frank Galatis play finds its timeless heart in the generous spirit of the common man. An L.A. Theatre Works full-cast performance featuring: Shirley Knight as Ma Joad Jeffrey Donovan as Tom Joad Emily Bergl as Rose of Sharon Michael Buie as Connie and others Daniel Chacon as Al Joad Maurice Chasse as Deputy Sheriff and others Shannon Cochran as Mrs. Wainwright and Elizabeth Sandry Trista Delamere as 2nd Narrator and Als Girl Francis Guinan as Jim Casy Charlie Matthes as Willy and others Gas Station Attendant and Hooper Ranch Guard Rod McLachlan as Uncle John Robert Pescovitz as Pa Joad Joel Rafael as Car Salesman and Man with Guitar Stephen Ramsey as 1st Narrator and others Nick Sadler as Agricultural Officer and others Andy Taylor as Gas Station Owner and others Floyd Knowles and Weedpatch Camp Director Todd Waring as Hooper Ranch Bookkeeper and others Fredd Wayne as Grampa, Mayor of Hooverville and Camp Guard Michael Weston as Noah Joad and others Kate Williamson as Gramma and others Live music performed by the Joel Rafael Band. Adapted by Frank Galati. Directed by Richard Masur. Recorded before a live audience at the Skirball Cultural Center, Los Angeles. Coauthors: Adapted By Frank Galati

A Walk in the Woods
by Lee Blessing