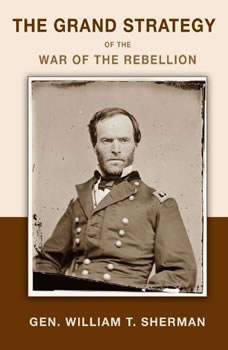 The Grand Strategy of the War of the Rebellion

Twenty-two years after the close of the American Civil War, General William T. Sherman shared his thoughts and insights on the "grand strategy" of the war. He wrote: "We veterans believe that in 1861-5 we fought a holy war, with absolute right on our side, with pure patriotism, with reasonable skill, and that we achieved a result which enabled the United States of America to resume her glorious career in the interest of all mankind, after an interruption of four years by as needless a war as ever afflicted a people. "The causes which led up to that war have been well described...innumerable volumes have been published, and nearly all the leading magazines of our country have added most interesting narratives of events.... Editors...applied long ago to have me assist them in their laudable purpose. I declined, but the pendulum of time seems to have swung too far in the wrong direction: One is likely to receive the impression that the Civil War was only a scramble for power by mobs and not a war of high principle, guided by men of great intelligence according to the best light they possessed. Discovering that one branch of the history of that war, 'grand strategy,' has been overlooked or slighted by writers, I have undertaken to discuss it."