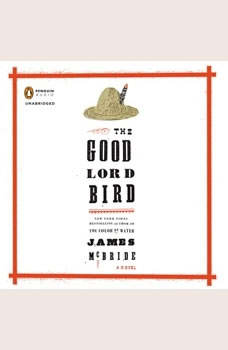 Winner of the 2013 National Book Award for Fiction

From the bestselling author of The Color of Water and Song Yet Sung comes the story of a young boy born a slave who joins John Brown’s antislavery crusade—and who must pass as a girl to survive.

Henry Shackleford is a young slave living in the Kansas Territory in 1857, when the region is a battleground between anti- and pro-slavery forces. When John Brown, the legendary abolitionist, arrives in the area, an argument between Brown and Henry’s master quickly turns violent. Henry is forced to leave town—with Brown, who believes he’s a girl.

Over the ensuing months, Henry—whom Brown nicknames Little Onion—conceals his true identity as he struggles to stay alive. Eventually Little Onion finds himself with Brown at the historic raid on Harpers Ferry in 1859—one of the great catalysts for the Civil War.

An absorbing mixture of history and imagination, and told with McBride’s meticulous eye for detail and character, The Good Lord Bird is both a rousing adventure and a moving exploration of identity and survival.

Jemistry Daniels is a bitter woman and not trying to hide it. Even though she is beautiful, intelligent and makes six figures a year as a high school principal in Washington, D.C., one man after another has failed her. So she decides to give up and ...

New York Times best-selling author Carl Weber and award-winning novelist Eric Pete team up to deliver the first in a much-anticipated new trilogy. The Family Business features two times the heat, two times the fun, and two times the drama as the mem...

Mega bestselling author Zane returns to the world of her hugely popular novels Addicted and Nervous in this dark and exhilarating follow-up featuring a beautiful but emotionally damaged pop star desperate and determined to enact revenge on those who...

Right from the start, Bigger Thomas had been headed for jail. It could have been for assault or petty larceny; by chance, it was for murder and rape. Native Son tells the story of this young black man caught in a downward spiral after he kills a yo...