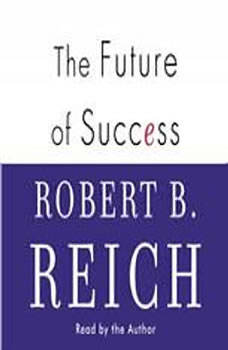 The Future of Success

If you think it’s getting harder to both make a living and make a life, economist and former secretary of labor Robert Reich agrees with you. Americans may be earning more than ever before, but we’re paying a steep price: we’re working longer, seeing our families less, and our communities are fragmenting.

With the clarity and insight that are his hallmarks, Reich delineates what success has come to mean in our time. He demonstrates that although we have more choices as consumers, and investors, the choices themselves are undermining the rest of our lives. It is getting harder for people to be confident of what they will be earning next year, or even next month. At the same time, our society is splitting into socially stratified enclaves--the wealthier walled off and gated, the poorer isolated and ignored. Although the trends he discusses are powerful, they are not irreversible, and Reich makes provocative suggestions for how we might create a more balanced society and more satisfying lives. Some of his ideas may surprise you; all should spark a healthy–and essential–national debate.

From the Trade Paperback edition.

Is Wall Street bad for Main Street America? In looking at the forces that brought our current administration to power one thing is clear: much of the population believes that our economic system is rigged to enrich the privileged elites at the expen...

Pride, greed, and power have driven men to do the unthinkable–including selling out their nations and unsuspected citizens to the most corrupt and destructive “invisible” global leaders on Earth. But how did this happen on American...

Nothing Is True and Everything Is Possible: The Surreal Heart of the New Russia
by Peter Pomerantsev

In the new Russia, even dictatorship is a reality show. Professional killers with the souls of artists, would-be theater directors turned Kremlin puppet-masters, suicidal supermodels, Hell’s Angels who hallucinate themselves as holy warriors,...

What Will You Learn From this audiobook? Tackling 9 specific financial myths, Killing Sacred Cows is a must for mission-driven individuals. It plainly reveals these shocking truths kept hidden by the traditional financial industry: A 401(k) is no...

Wall Street legend and bestselling author Jim Rogers offers investing insights and economic, political, and social analysis, drawing on lessons and observations from his lifetime in the markets.  Jim Rogers, whose entertaining accounts of his t...

The Upside of Inequality
by Edward Conard

From the New York Times-bestselling author of Unintended Consequences comes another bold and contrarian book by the man who famously defended capitalism and the one percent at the height of the Occupy movement. Conventional wisdom says income i...