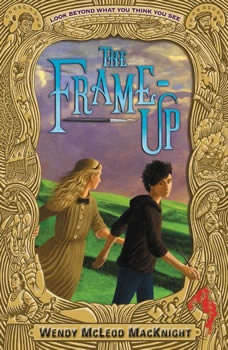 When Sargent Singer discovers that the paintings in his father’s gallery are alive, he is pulled into a captivating world behind the frame that he never knew existed.Filled with shady characters, devious plots, and a grand art heist, this inventive mystery-adventure celebrates art and artists and is perfect for fans of Night at the Museum and Blue Balliett’s Chasing Vermeer. There’s one important rule at the Beaverbrook Gallery—don’t let anyone know the paintings are alive. Mona Dunn, forever frozen at thirteen when her portrait was painted by William Orpen, has just broken that rule. Luckily twelve-year-old Sargent Singer, an aspiring artist himself, is more interested in learning about the vast and intriguing world behind the frame than he is in sharing her secret.And when Mona and Sargent suspect shady dealings are happening behind the scenes at the gallery, they set out to find the culprit. They must find a way to save the gallery—and each other—before they are lost forever.  With an imaginative setting, lots of intrigue, and a thoroughly engaging cast of characters, The Frame-Up will captivate readers of Jacqueline West’s The Books of Elsewhere.

As Mira and her neighbors discover, more than you might ever imagine! Based on the true story of the Urban Art Trail in San Diego, California, Maybe Something Beautiful reveals how art can inspire transformation-and how even the smallest artists can...

The Secret of the Key: A Sixty-Eight Rooms Adventure
by Marianne Malone

Filled with magic, mystery, miniatures, and adventure, the Sixty-Eight Rooms is the perfect series for fans of Chasing Vermeer, The Mixed-Up Files of Mrs. Basil E. Frankweiler, and The Dollpeople!   Chicago sixth graders Ruthie and Jack think t...

The Museum
by Susan Verde

As a little girl tours and twirls through the halls of the art museum, she finds herself on an exciting adventure. Each piece of art evokes something new inside of her: silliness, curiosity, joy, and ultimately inspiration. When confronted with an e...

The Sixty-Eight Rooms
by Marianne Malone

Almost everybody who has grown up in Chicago knows about the Thorne Rooms. Housed in the Children’s Galleries of the Chicago Art Institute, they are a collection of 68 exquisitely crafted miniature rooms made in the 1930s by Mrs. James Ward Th...

Louise and Andie
by Kelly Light

In this stunning companion to the acclaimed Louise Loves Art, Louise has a new neighbor, the creative and offbeat Andie—but can they overcome their differences and be friends?Louise loves art more than anything. Imagine her delight when a new...

What good can a splash of color do in a community of gray? As Mira and her neighbors discover, more than you might ever imagine! Based on the true story of the Urban Art Trail in San Diego, California, Maybe Something Beautiful reveals how art ca...

Behind the Canvas
by Alexander Vance

There is a world behind the canvas. Past the paint of the canvas is a realm where art lives, breathes, creates, destroys. Claudia Miravista loves art but only sees what is on the surface, until the Dutch boy Pim appears in her painting. Pim has been...

Tree-ear is an orphan boy in a 12th-century Korean potters’ village. When he accidentally breaks a pot, he must work for the master to pay for the damage by setting off on a difficult and dangerous journey that will change his life forever.Fro...

The Mysterious Edge of the Heroic World
by E.L. Konigsburg

"ninety percent of who you are is invisible." Amedeo Kaplan seems just like any other new kid who has moved into the town of St. Malo, Florida, a navy town where new faces are the norm. But Amedeo has a secret, a dream: More than anything in the wo...