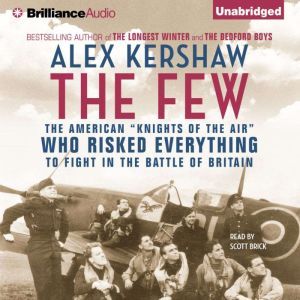 The Few: The American

It was the summer of 1940, and World War II had been raging for nearly a year. Buoyed by his successes on the Continent, Hitler was now planning an invasion of England to seal Europe’s fate.Though the United States was still a neutral country, a few Americans decided they couldn’t remain on the sidelines. They joined Britain’s Royal Air Force to defend the country—with the future of civilization hanging in the balance.The Few tells the dramatic and unforgettable story of these Americans who defied their own country’s neutrality laws and risked their very citizenship to fight side-by-side with England’s finest pilots. Flying the lethal and elegant Spitfire, they became “knights of the air” who, with minimal training but plenty of guts, dueled the skilled and fearsome aces of Germany’s Luftwaffe.By October 1940, they had helped England win the greatest air battle in the history of aviation. Some five years later, at war’s end, just one of them would be alive. Winston Churchill once said famously of all those who fought in the Battle of Britain, “Never in the field of human conflict was so much owed by so many to so few.” These daring Americans were the few among the “few.”

most people have forgetton or never knew what this men did for the us and england and the free world. they gave everything and most their lives to save us and the world from the nazies

Very well done. I enjoyed this first book very much. Easy to keep the characters separated and well narrated. Easy for me to recommend. It had me at Google Image to check some of the aircraft. Enjoy this one.