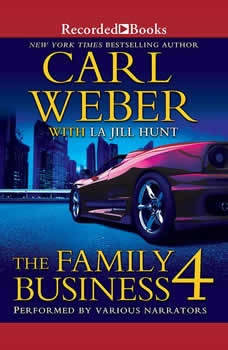 National bestselling authors Carl Weber and Treasure Hernandez are back with their latest installment in the wildly popular Family Business series. LC Duncan, patriarch and leader of the Duncan clan is alive and well after being shot by a mysterious gunman. His near death experience has caused him and his wife Chippy to reflect on both the past and present, and together they decide that it's time to return to Waycross, Georgia for a long overdue family reunion. But wherever the Duncans go, trouble and drama are never too far behind, and this time it comes in the form of longtime Duncan enemy Vinnie Dash, and Ruby, the mother of Orlando Duncan's baby who disappeared before the child was born. Narrators: Bishop Banks, B. Lipton Bennett, Morae Brehon, Dylan Ford, Ebony Ford, Mercedes Gold, Damany Jackson, Diana Luke, Kentra Lynn, Ebony Mendez, Ian Eugene Ryan, Jason Theus, Jules Williamson