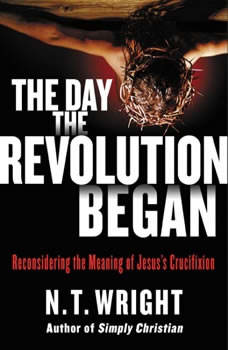 The Day the Revolution Began: Reconsidering the Meaning of Jesus's Crucifixion

The renowned scholar, Anglican bishop, and bestselling author widely considered to be the heir to C. S. Lewis contemplates the central event at the heart of the Christian faith—Jesus’ crucifixion—arguing that the Protestant Reformation did not go far enough in transforming our understanding of its meaning.In The Day the Revolution Began, N. T. Wright once again challenges commonly held Christian beliefs as he did in his acclaimed Surprised by Hope. Demonstrating the rigorous intellect and breathtaking knowledge that have long defined his work, Wright argues that Jesus’ death on the cross was not only to absolve us of our sins; it was actually the beginning of a revolution commissioning the Christian faithful to a new vocation—a royal priesthood responsible for restoring and reconciling all of God’s creation. Wright argues that Jesus’ crucifixion must be understood within the much larger story of God’s purposes to bring heaven and earth together. The Day the Revolution Began offers a grand picture of Jesus’ sacrifice and its full significance for the Christian faith, inspiring believers with a renewed sense of mission, purpose, and hope, and reminding them of the crucial role the Christian faith must play in protecting and shaping the future of the world.

Empathy for the Devil
by JR. Forasteros

Do we have anything in common with the bad guys of the Bible? The sins of wrath, idolatry, and abuse of power are closer to us than we think. How do we guard against them? We learn not only by following moral exemplars we also need to look at t...

Why does the Bible depict a world in which humans, with surprising regularity, encounter the divine-wrestling an angel, addressing a burning bush, issuing forth prophecy without any choice in the matter? These stories spoke very differently to their...

What is the Bible?
by Rob Bell

Rob Bell, the beloved author of Love Wins and What We Talk About When We Talk About God, goes deep into the Bible to show how it is more revelatory, revolutionary, and relevant than we ever imagined—and offers a cogent argument for why we nee...

This Dangerous Book
by Steve Green

It is the top selling book in history. It brings social upheaval, international arguments, and political controversy. It has been used to justify both love and war. And for generations, it has found its way into the hearts of millions, offering comf...

The Exodus Revealed
by Nicholas Perrin

What really happened during Israel's journey from slavery to the promised land? Bible scholar Nicholas Perrin explains the true story of the Exodus while adding helpful background information from biblical history, archaeology, and more. You will ....

&ldquo;A wonderful introduction to our neglected Christian tradition.&rdquo;&#160;Many Christians today tend to view the story of medieval faith as a cautionary tale. Too&#160;often, they dismiss the Middle Ages as a period of corrup...

Understand the difficulties and challenges of daily living, religious customs, providing for a family, life at home, education, the Roman occupation, along with an authentic view of what was happening throughout the world in the first-century. Jesus...

The Bible you usually read is not the complete story. Some holy writings were left out for political or theological reasons, others simply because of the physical restrictions of ancient bookmaking technology. At times, the compilers of the Bible sk...

Adventure-filled narrative untangles the intriguing web of people and events that shaped history's most powerful book. From the earliest oral traditions to ink on parchment and ultimately the printing press, this is the story behind the best-sel...