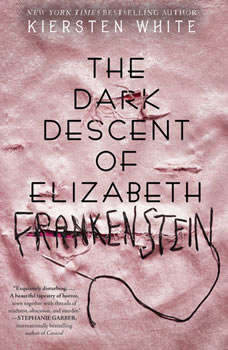 The Dark Descent of Elizabeth Frankenstein

Elizabeth Lavenza hasn't had a proper meal in weeks. Her thin arms are covered with bruises from her "caregiver," and she is on the verge of being thrown into the streets . . . until she is brought to the home of Victor Frankenstein, an unsmiling, solitary boy who has everything--except a friend.

Victor is her escape from misery. Elizabeth does everything she can to make herself indispensable--and it works. She is taken in by the Frankenstein family and rewarded with a warm bed, delicious food, and dresses of the finest silk. Soon she and Victor are inseparable.

But her new life comes at a price. As the years pass, Elizabeth's survival depends on managing Victor's dangerous temper and entertaining his every whim, no matter how depraved. Behind her blue eyes and sweet smile lies the calculating heart of a girl determined to stay alive no matter the cost . . . as the world she knows is consumed by darkness.


"Exquisitely disturbing. The Dark Descent of Elizabeth Frankenstein is a beautiful tapestry of horror, sewn together with threads of madness, obsession, and murder. Kiersten White has written a masterful and monstrous retelling."—STEPHANIE GARBER, #1 New York Times and internationally bestselling author of Caraval and Legendary

"Visceral, sinister, and inescapably compelling, The Dark Descent of Elizabeth Frankenstein feels at once reverent of its inspiration, and entirely new. White's skill is scalpel-sharp." —VICTORIA SCHWAB, #1 New York Times bestselling author of This Savage Song

“Kiersten White has breathed fresh life into a much-loved classic. Even Mary Shelley herself would be riveted by the dark lengths Elizabeth Lavenza would go to in order to survive. A dark and lovely midnight read.—MEGAN SHEPHERD, New York Times bestselling author of The Madman's Daughter trilogy

"In the hands of master storyteller Kiersten White, the bones of a familiar story are reconstructed to form an inventive, grotesque, and completely unexpected reimagining of Frankenstein. Mary Shelley would be proud."—MACKENZI LEE, New York Times bestselling author of The Gentlemen's Guide to Vice and Virtue