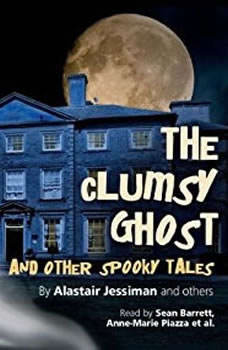 The Clumsy Ghost and Other Spooky Tales

In this entertaining anthology of seven new ghost stories, written especially for Naxos AudioBooks, we meet all kinds of phantoms in different situations: a kind-hearted but accident-prone spectre unwittingly upsetting a family home, as well as ghosts in ancient Egypt, on board a pirate ship, and in a Newcastle swimming pool. Engaging and slightly sinister, The Clumsy Ghost and Other Spooky Tales is a delightful shiver for all the family.

You would like being friends with Leo. He likes to draw, he makes delicious snacks, and most people can't even see him. Because Leo is also a ghost. When a new family moves into his home and Leo's efforts to welcome them are misunderstood, Leo decid...

Jon didn't expect to be confronted by a pack of vengeful ghosts at his new boarding school. Now he and his friend Ella must uncover a centuries-old murder, all while haunted by terrifying spirits. When Jon summons the ghost of Knight Longspee, only ...

Elizabeth and Zenobia
by Jessica Miller

Abandoned by her mother and neglected by her scientist father, timid Elizabeth Murmur has only her fearless friend, Zenobia, for company. And Zenobia's company can be very trying! When Elizabeth's father takes them to live in his family home, Wither...

One for Sorrow
by Mary Downing Hahn

Against the ominous backdrop of the influenza epidemic of 1918, Elsie, the class tattletale, liar, and thief, claims the new girl at school, Annie, as her best friend. But Annie soon makes other friends as well and finds herself joining them in teas...

It’s an icky, sticky situation…Look out for ghost goo! Dripping sticky green slime wherever it goes, an “ASG” (that’s Averagely Spooky Ghost) is hiding out in Tom’s cellar. Why? Because it’s being haunted, t...

The Turnkey of Highgate Cemetery
by Allison Rushby

The Phantom Tower
by Keir Graff

Twin brothers discover their new home is also a portal--for an hour a day--to a parallel dimension in this rollicking middle-grade adventure, perfect for fans of The Mysterious Benedict Society Colm and Mal are twins so identical their own mom can't...

Girl in the Locked Room, The
by Mary Downing Hahn

Jules's family moves into an old abandoned house. Her parents love it, but she's frightened and feels a sense of foreboding. When she sees a pale face in an upstairs window, she can't stop wondering about the eerie presence on the top floor-in a roo...

Maybe you don't believe in ghosts, and vampires, and spooky things that creep around in the dark...Then you don't mind sitting by a vampire's tomb at midnight. Or being locked up with the mummies in a dark museum. Or you might like to join the myst...