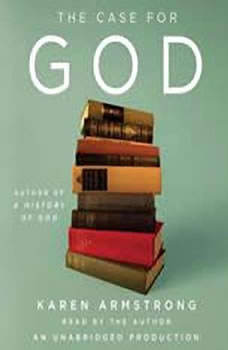 The Case for God

Moving from the Paleolithic age to the present, Karen Armstrong details the great lengths to which humankind has gone in order to experience a sacred reality that it called by many names, such as God, Brahman, Nirvana, Allah, or Dao. Focusing especially on Christianity but including Judaism, Islam, Buddhism, Hinduism, and Chinese spiritualities, Armstrong examines the diminished impulse toward religion in our own time, when a significant number of people either want nothing to do with God or question the efficacy of faith. Why has God become unbelievable? Why is it that atheists and theists alike now think and speak about God in a way that veers so profoundly from the thinking of our ancestors?

Answering these questions with the same depth of knowledge and profound insight that have marked all her acclaimed books, Armstrong makes clear how the changing face of the world has necessarily changed the importance of religion at both the societal and the individual level. And she makes a powerful, convincing argument for drawing on the insights of the past in order to build a faith that speaks to the needs of our dangerously polarized age. Yet she cautions us that religion was never supposed to provide answers that lie within the competence of human reason; that, she says, is the role of logos. The task of religion is “to help us live creatively, peacefully, and even joyously with realities for which there are no easy explanations.” She emphasizes, too, that religion will not work automatically. It is, she says, a practical discipline: its insights are derived not from abstract speculation but from “dedicated intellectual endeavor” and a “compassionate lifestyle that enables us to break out of the prism of selfhood.”

In James Carroll's provocative reading of the deep past, the Bible's brutality responded to the violence that threatened Jerusalem from the start. Centuries later, the mounting European fixation on a heavenly Jerusalem sparked both anti-Semitism and...

One Nation, Under Gods
by Peter Manseau

A groundbreaking new look at the story of AmericaAt the heart of the nation's spiritual history are audacious and often violent scenes. But the Puritans and the shining city on the hill give us just one way to understand the United States. Rather t...

Prayer in America (One Nation Under God)
by James P. Moore, Jr.

In this highly original approach to the history of the United States, James Moore focuses on the extraordinary role that prayer has played in every area of American life, from the time of the first settlers to the present day and beyond.A stirring c...

In this timely, provocative, and uplifting journey, the bestselling author of Walking the Bible searches for the man at the heart of the world's three monotheistic religions -- and today's deadliest conflicts. At a moment when the world is asking, ...

The Marketing of Evil
by David Kupelian

Americans have come to tolerate, embrace and even champion many things that would have horrified their parents’ generation – from easy divorce and unrestricted abortion-on-demand to extreme body piercing and teaching homosexuality to gra...

NEW YORK TIMES BESTSELLER • The bestselling author of Zealot and host of Believer explores humanity’s quest to make sense of the divine in this concise and fascinating history of our understanding of God.  In Zealot, Reza Aslan repla...

What the Gospels Meant
by Garry Wills

“A remarkable achievement—a learned yet eminently readable and provocative exploration of the four small books that reveal most of what’s known about the life and death of Jesus.” (Los Angeles Times)Look out for a new book fr...