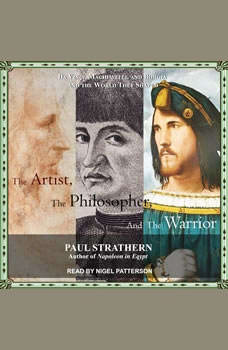 The Artist, the Philosopher, and the Warrior: Da Vinci, Machiavelli, and Borgia and the World They Shaped

Leonardo da Vinci, Niccolo Machiavelli, and Cesare Borgia—three iconic figures whose intersecting lives provide the basis for this astonishing work of narrative history. They could not have been more different, and they would meet only for a short time in 1502, but the events that transpired when they did would significantly alter each man's perceptions—and the course of Western history. In 1502, Italy was riven by conflict, with the city of Florence as the ultimate prize. Machiavelli, the consummate political manipulator, attempted to placate the savage Borgia by volunteering Leonardo to be Borgia's chief military engineer. That autumn, the three men embarked together on a brief, perilous, and fateful journey through the mountains, remote villages, and hill towns of the Italian Romagna—the details of which were revealed in Machiavelli's frequent dispatches and Leonardo's meticulous notebooks. Superbly written and thoroughly researched, The Artist, the Philosopher, and the Warrior is a work of narrative genius—whose subject is the nature of genius itself.