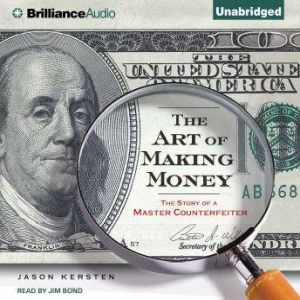 The Art of Making Money: The Story of a Master Counterfeiter

Art Williams was a precocious student with a bright future, but his dreams shattered when his father abandoned the family and his bipolar mother lost her wits. Living in one of Chicago’s worst housing projects, Williams was breaking open parking meters at age twelve and by his mid-teens he was robbing drug dealers. His quest for both a father figure and stable income would merge at the age of sixteen, when a criminal master nicknamed “Da Vinci” taught him the centuries-old art of counterfeiting. Following a stint in prison, Williams returned to society to find that the Treasury Department had issued the most secure hundred-dollar bill ever created: the 1996 New Note. He spent months trying to circumvent its security features before arriving at a bill so perfect that even law enforcement had difficulty distinguishing it from the real thing. Williams went on to print millions in counterfeit, selling it to criminal organizations and using it to fund cross-country spending sprees. Spending his fake money as quickly as he could print it but still unsatisfied, he dropped everything to track down his long-lost father in the wilds of Alaska, setting in motion a chain of betrayals that would be his undoing. The Art of Making Money is a stirring portrait of the rise and inevitable fall of a modern-day criminal mastermind.