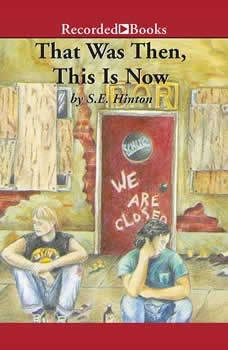 That Was Then, This Is Now

"It had been a real weird winter. Last fall Mark and me had thought just alike, as one person; now we couldn't even talk." Bryon and Mark aren't related, but they are as close as brothers. Ever since his parents died when he was nine, Mark has lived with Bryon and his mother. Now at 16 they like to reminisce about old times-the fights and pranks at school, smoking and swearing-junk they got into when they were younger. But lately things have been different. Bryon starts spending a lot of time with Cathy, and she makes him feel there are some things worth working for. He grows bored with all the fighting, the dead-end choices of life on the streets. And as Bryon's life takes one direction, Mark's life takes another. When Bryon discovers that Mark is pushing drugs, he faces a choice that could ruin their friendship. S.E. Hinton is the author of The Outsiders, a book she wrote when she was 16. That Was Then, This Is Now is a coming-of-age story set in the 1960s.