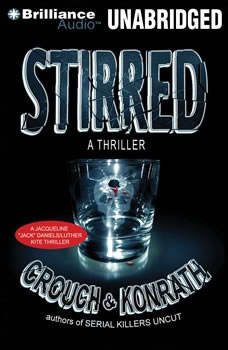 Lt. Jacqueline "Jack" Daniels has seen humanity at its most depraved and terrifying. She's lost loved ones. Come close to death countless times. But she always manages to triumph over evil. Luther Kite is humanity at its most depraved and terrifying. He's committed unthinkable acts. Taken human life for the sheer pleasure of it. He is a monster among monsters, and no one has ever caught him. Each is the best at what they do. Peerless. Unmatched.Until now...In Luther's experience, people are weak. Even the strong and fearless break too easily. He wants a challenge, and sets his depraved sights on Jack. But with a baby on the way, Jack is at her most vulnerable. She's always been a fighter, but she's never had so much to fight for. So he's built something especially for Jack. His own, private ninth circle of hell—a nightmare world in a forgotten place, from which no one has ever escaped.It's J.A. Konrath's greatest heroine versus Blake Crouch's greatest villain in Stirred, the stunning conclusion to both Konrath's Lt. Jacqueline "Jack" Daniels thriller series and Crouch's Andrew Z. Thomas series.Only one can survive. And it won't be whom you think.