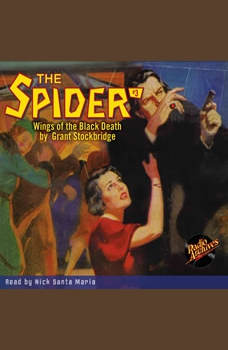 Spider #3 Wings of the Black Death, The

For ten exciting years, the Spider battled the underworld, imprinting his scarlet seal on the bodies of the criminals he slew. No one knew his name. His face was unknown. Pursued by the police, sought by the mob, the Master of Men crushed crime with a blazing ferocity never witnessed before or since. Now hes back in a series of riveting audiobooks adapting his most intense adventures from the pages of The Spider magazine, as chronicled by Norvell W. Page, writing as Grant Stockbridge! Manhattan is under siege from a new brand of terrorista human monster who calls himself the Black Death. His weapon a choice: a virulent strain of Bubonic plague that strikes down its victims within hours. Unless the city fathers pay up, New York will become a charnel house of horrors. Can the Spider defeat this menaceor will Deaths black wings smother him too? This exciting audiobook is taken from the December, 1933 issue of The Spider.