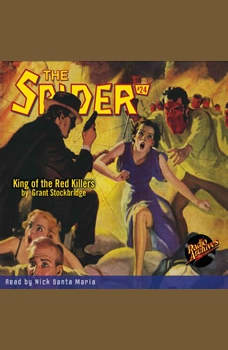 Spider #24 King of the Red Killers, The

The Spider heard the first dread rumors in the secret councils of the Underworld. A keen-witted, ambitious criminal leader named El Gaucho backed by a powerful army of brutal killers was pillaging the West. Looting, ravaging, slaughtering wantonly, the master-mind of crime was ruthlessly following a plan which would make him King of America! Richard Wentworth the debonair aristocrat who is in truth the deadly Spider, protector of the oppressed knew that he must strike quickly, or die! For Wentworth, ever running a double risk, forced now to sacrifice a brave, dear friend to ghastly torture, faced a grim, new danger in the bounty-hunters who wanted to collect El Gauchos reward its own weight of the purest gold for the Spiders head! King of the Red Killers is torn from the pages of the September, 1935 issue of The Spider magazine.