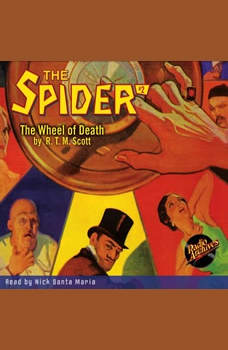 Spider #2 The Wheel of Death, The

Here and there throughout the city good citizens died suddenly of natural causesand were forgotten. Othersmen of character and positiontook their own lives. And the madhouses were getting more than their rightful share of the citys great! None but the Spider, hunted down and finally at bay, sensed the creeping, ghastly threat that dogged the footsteps of seven million people! In his second recorded case, criminologist Richard Wentworth again assumes the avenging personality of the Spideramong other guisesin order to uncover the truth behind an audacious scheme to drive insane Manhattans elite. But to what fell purpose? The Wheel of Death first appeared in the November, 1933 issue of The Spider magazine and was written by acclaimed mystery novelist, R. T. M. Scott.