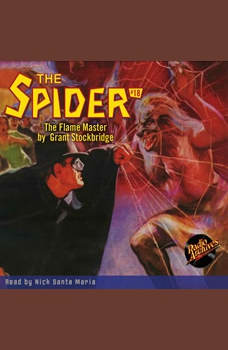 Spider #18 The Flame Master, The

For ten exciting years, the Spider battled the underworld, imprinting his scarlet seal on the bodies of the criminals he slew. No one knew his name. His face was unknown. Pursued by the police, sought by the mob, the Master of Men crushed crime with a blazing ferocity never witnessed before or since. Now hes back in a series of riveting audiobooks adapting his most intense adventures from the pages of The Spider magazine, as chronicled by Norvell W. Page, writing as Grant Stockbridge! A weird new threat lashes Manhattan in the form of a giant lion-headed man-creature who wields lighting bolts as his weapon of conquest. Even the vaunted Spider stands in awe of this powerful being who claims to have come to Earth from the planet Mars! Come into my web, said the Spider to the Lion Man? Adapted from the March, 1935 story appearing in The Spider magazine.