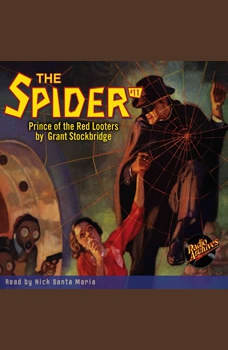 Spider #11 Prince of the Red Looters, The

For ten grim years, the Spider battled the underworld, imprinting his scarlet seal on the bodies of the criminals he slew. No one knew his name. His face was unknown. Pursued by the police, sought by the mob, the Master of Men crushed crime with a blazing intensity never witnessed before or since. Now hes back in a series of riveting audiobooks adapting his most intense adventures from the pulpy pages of The Spider magazine, as chronicled by Norvell W. Page, writing as Grant Stockbridge! When a vicious new supercriminal calling himself the Fly appears on the scene, pillaging and slaughtering with impunity, criminologist Richard Wentworth takes up the sinister disguise and punishing guns of the Spider to hunt him down. But when the Spider and the Fly cross swords, which one will perish in the Spiders web? The wily Fly or the Spider himself? Adapted from the August 1934 story, appearing in The Spider magazine.