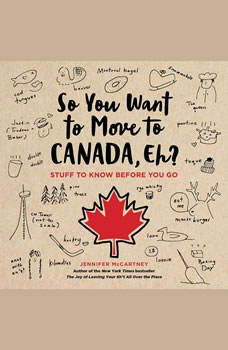 So You Want to Move to Canada, Eh?: Stuff to Know Before You Go

Laugh as you learn about America's friendly northern neighbor with this step-by-step guide to Canadian customs, pop culture, and slang -- perfect for anyone who's considered moving to (or just visiting) maple leaf country.Written by New York Times bestselling author (and born-and-bred Canuck) Jenn McCartney, this comprehensive guide will teach you everything you need to know about Canada, including: HistoryBewildering residency rules, demystifiedUnique laws and customsContributions to the arts and pop culture (Celine Dion, Margaret Atwood, Justin Bieber)Colorful slang, explainedCreative doodles, helpful charts, and fun graphsHilarious and honest, this guide will delight your politically disgruntled father, nudge your bleeding-heart neighbor to hit the road, and inspire you to plan for (or daydream about) your own Canadian getaway.