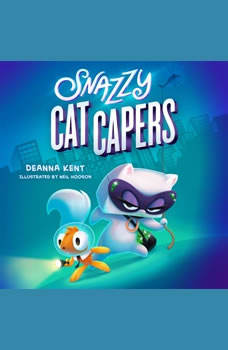 “Classy bad girl Ophelia is as funny as she is furry…she’s the pussycat love child of James Bond and Zsa Zsa Gabor, and who can’t love that?" —Kirkus Reviews Life is short. Diamonds are fur-ever.Internationally famous cat burglar Ophelia von Hairball V adores jewels­—the only thing she loves more is a challenge. She's never met a safe she couldn't crack.Now the Furry Feline Burglary Institute (FFBI) offers her the ultimate caper: steal the giant Himalayan diamond and win their top award!There's a catch! The FFBI sends an enthusiastic inventor to help Ophelia...but this cat works alone, and Oscar Fishgerald Gold smells fishy.Can the smartest, stealthiest, and snazziest of cats learn to work with a fintastic sidekick and prove she's still the world's most purr-fect burglar?Adventure, heists, and teamwork abound in this fun, witty middle grade audiobook brimming with cat-tastic adventures!An Imprint Book

Pete the Cat and His Magic Sunglasses
by James Dean

Splat the Cat: On with the Show
by Rob Scotton

Splat the Cat can't wait to be in his school play about castles and kings and queens—maybe he'll even get to play a knight! Will Splat find a way to steal the show? Join him and his classmates for another hilarious Splat the Cat adven...

Skippyjon Jones in the Dog-House
by Judy Schachner

The Siamese kitty boy with the gigantico imagination has returned for another loco adventure. In his room for a time-out, Skippyjon Jones lets his imagination take him to a shack where his Chihuahua friends are yipping and yapping and hiding out fr...

When Pete sees that the playground is in bad shape, he gets a totally groovy idea—make a new one! Pete calls in construction workers and cement mixers, backhoes and dump trucks to build the coolest playground ever. But when his plans don'...

The Cat in the Hat Comes Back
by Dr. Seuss

The mischievous cat returns on a snowy day when there is work to be done.

From the creator of The New York Times bestseller Boing! comes the riotous story of a cat gone berserk -- four times over an in alphabetical order each time. Kitty is not happy hen she's told that her favorite foods are all gone and all that's left ...

A funny bedtime story from the New York Times bestselling Pete the Cat series.Pete the Cat and his friends are having so much fun playing and surfing in the sun, they don't want the day to end. Pete has an idea—how about a sleepover? Groovy!A...

From the bestselling Pete the Cat series comes a story about friendship and acceptance.There's a new guy in town, and Pete can't wait to meet him. After all, more friends mean more fun. When Pete finally meets Gus, he realizes they're very differen...

Stick Cat: Cats in the City
by Tom Watson