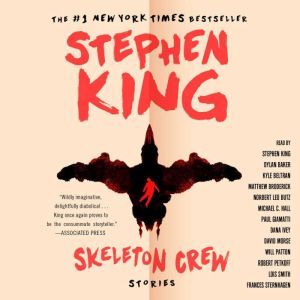 Includes the stories “Uncle Otto’s Truck” and “Mrs. Todd’s Shortcut”—set in the fictional town of Castle Rock, Maine Features “The Mist” now a TV series event on Spike The Master at his scarifying best! From heart-pounding terror to the eeriest of whimsy—tales from the outer limits of one of the greatest imaginations of our time! READ BY A STAR-STUDDED CAST OF NARRATORS! Stephen King, Dylan Baker, Kyle Beltran, Matthew Broderick, Norbert Leo Butz, Michael C. Hall, Paul Giamatti, Dana Ivey, Will Patton, Robert Petkoff, David Morse, Lois Smith, and Frances SternhagenIn “The Mist,” a supermarket becomes the last bastion of humanity as a peril beyond dimension invades the earth… Touch “The Man Who Would Not Shake Hands,” and say your prayers… There are some things in attics which are better left alone, things like “The Monkey”… The most sublime woman driver on earth offers a man “Mrs. Todd’s Shortcut” to paradise… A boy’s sanity is pushed to the edge when he's left alone with the odious corpse of “Gramma”… If you were stunned by Gremlins, the Fornits of “The Ballad of the Flexible Bullet” will knock your socks off… Trucks that punish and beautiful teen demons who seduce a young man to massacre; curses whose malevolence grows through the years; obscene presences and angels of grace—here, indeed, is a night-blooming bouquet of chills and thrills.