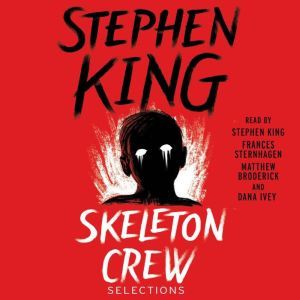 Includes the stories “Uncle Otto’s Truck” and “Mrs. Todd’s Shortcut”—set in the fictional town of Castle Rock, Maine Four complete and unabridged selections from the electrifying bestseller read by a stellar group of narrators.“The Raft” is the unforgettable tale of an idyllic autumn swim suddenly transformed into an ordeal of unbridled horror. Read by Stephen King. “Mrs. Todd’s Shortcut” is a story in which a middle-aged woman in a Mercedes roadster finds a terrifying pathway to paradise. Read by Dana Ivey. “The Monkey”—is it merely a child’s wind-up toy, or an incarnation of the purest evil? Read by Matthew Broderick. “Gramma” is the story of a little boy left in charge of his sick grandmother, who’s dying to give him a hug....Read by Frances Sternhagen. In this “wildly imaginative, delightfully diabolical collection…King once again proves to be the consummate storyteller” (Associated Press).