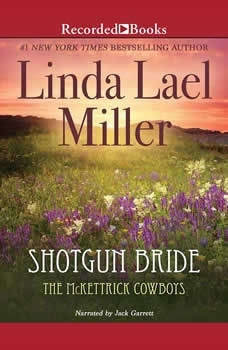 One ranch. Three sons. Only one will inherit...and on one condition. Tired of waiting for his sons to settle down, Arizona-territory rancher Angus McKettrick announces a competition: the first son to marry and produce a grandchild will inherit Triple M ranch. Now, three distinctly different, equally determined cowboys are searching high and low for brides. Kade McKettrick's got five mail-order brides-to-be camped out at the local hotel, all more than eager to provide him with the heir that will win him the Triple M ranch. But Kade, the newly appointed marshal, has his hands full with a troublesome outlaw gang. Why, then, is he so easily distracted by pretty "Sister Mandy"-who most assuredly is not the nun she claims to be? On the run from her outlaw stepfather, Mandy Sperrin hides beneath her solemn disguise, and vows to keep her wild, passionate nature from the respectable citizens of Indian Rock. Yet when the handsome marshal makes it clear that he wants her, Mandy gives in to her heated desires....

It's five days before Christmas and things are not looking merry for Fugitive Apprehension Agent Stephanie Plum. She hasn't got a tree. She hasn't bought any presents. The malls are jam-packed with staggering shoppers. There's not a twinkle light an...

The reissue of #1 New York Times bestselling author Linda Lael Miller's Secondhand Bride, the third installment in the McKettrick Cowboys series and the basis for her wildly popular McKettrick Men and McKettricks of Texas series with Harlequin! The ...