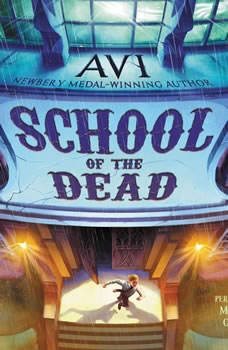 School of the Dead

In this spine-tingling story from Newbery Medal winner Avi, a boy must solve the mystery of the ghost haunting him.For most of Tony Gilbert’s life, he has thought of his uncle as “Weird Uncle Charlie.” That is, until Uncle Charlie moves in with Tony and his family. Uncle Charlie is still odd, of course—talking about spirits and other supernatural stuff—but he and Tony become fast friends, and Tony ends up having a lot of fun with Uncle Charlie.When Uncle Charlie dies suddenly, Tony is devastated. Then he starts seeing Uncle Charlie everywhere! It doesn’t help that Tony switched schools—it was Uncle Charlie’s dying wish that Tony attend the Penda School, where Uncle Charlie himself went as a kid. The Penda School is eerie enough without his uncle’s ghost making it worse. On top of that, rumors have been circulating about a student who went missing shortly before Tony arrived. Could that somehow be related to Uncle Charlie’s ghost?Full of twists and turns that get spookier by the chapter, School of the Dead is a fast-paced mystery that Avi’s fans will devour!

The Seven Wonders of Sassafras Spring...
by Betty G. Birney