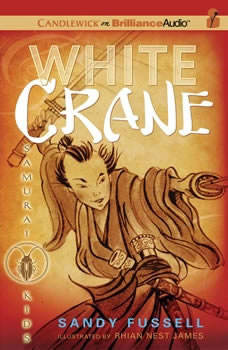 Can a one-legged boy become a great samurai warrior? Meet some unique aspiring champions in this kick-off to an exciting new martial arts series.Niya Moto is the only one-legged samurai kid in Japan, famous for falling flat on his face in the dirt. The one school that will accept him is the Cockroach Ryu, led by the legendary sensei Ki-Yaga. He may be an old man overly fond of naps, but Ki-Yaga is also known for taking in kids that the world has judged harshly: an albino girl with extra fingers and toes, a boy who is blind, a big kid whose past makes him loath to fight. A warrior in his time, Ki-Yaga demands excellence in everything from sword fighting to poetry. But can the ragtag Cockroaches make the treacherous journey to the Samurai Trainee Games, never mind take on the all-conquering Dragons? In a fast-moving, action-filled tale that draws on true details of feudal Japan, Niya finds there’s no fear they can’t face as long as they stick together—for their friendship is more powerful than a samurai sword.Mp>

For year, Ying hated his grandmaster for denying him the opportunity to train as a Dragon, and held a deep resentment for his five younger brothers–grandmaster’s favorites. He took his revenge and burnt the Cangzhen temple to the ground,...

Twelve-year-old Fu and his temple brothers Malao, Seh, Hok, and Long don't know who their parents were. Raised from infancy by their grandmaster, they think of their temple as their home and their fellow warrior monks—their "temple brothers"&m...

*Winner of a Parents' Choice Silver Award*"Delivers all the joys of a classic new-kid-at-school story. . . . Wu liu may be an invented martial art, but Lien's descriptions of fantastically beautiful complicated moves and spins will doubtless inspire...

Stink and the Ultimate Thumb-Wrestling Smackdown
by Megan McDonald

Yikes! Stink Moody, family brain, brings home a report card that isn’t perfect? Time to get into fighting shape and beat back that U for Unsatisfactory he got in Phys Ed (aka gym class)! For Stink to be victorious, he’s going to need the...

Drugged. Wounded. A price on her head. And that’s the good news.Herself. For years, Hok has hidden her true identity from her brothers at Cangzhen. Now, at last, she can be herself. And yet, who is she? Calm and thoughtful, Hok is a crane-styl...

Twelve-year-old Seh is a snake-style master and a keeper of secrets. Close-lipped and ever-watchful, he has used his highly attuned senses to collect information about his brothers, his temple, and even Grandmaster. Now, with the temple and Grandmas...

Little street urchin ShaoSu has always wanted to belong. His small size makes him an easy target for bullies and baddies and this little “mouse” always needs a place to hide. When he is befriended by Hok and Ying, he thinks he has found ...

Across the valley, a drumbeat echoes. For ten days, the drum will call the mountain ryus to war, including the samurai kids from the Cockroach Ryu. Only Japan’s feudal emperor can stop the war, so Niya and Sensei Ki-Yaga set off on a grueling ...

The temple has been burned.Grandmaster is dead.The only five survivors have scattered like the wind.Alone. For the first time. No brothers, no mentors, no teachers–just eleven-year-old Malao, the “monkey,” all by himself in the woo...