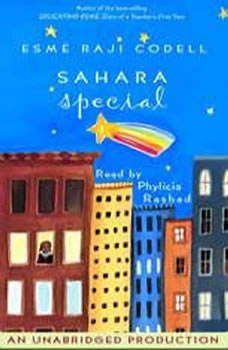 There are two files on Sahara Jones. The one the school counselor keeps is evidence that she's a fifth grader who needs special education. The other is the book Sahara is secretly writing, her Heart-Wrenching Life Story and Amazing Adventures.

The latest chapter in her book unfolds when her mother insists that she be taken out of special ed. So Sahara is facing fifth grade in a regular classroom, again. Enter, Miss Pointy, the new fifth grade teacher. With her elegant colored lipstick, and strange subjects such as "Puzzling" and "Time Travel," she's like no other teacher Sahara has ever known. Through Miss Pointy's unusual teaching, storytelling, and quiet support, Sahara finds the courage to overcome her fears and prove which file shows her true self.