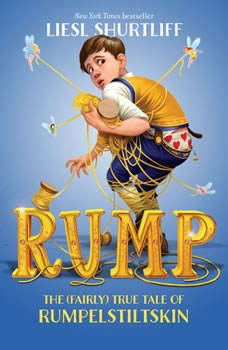 Rump: The True Story of Rumpelstiltskin

In a magic kingdom where your name is your destiny, 12-year-old Rump is the butt of everyone's joke. But when he finds an old spinning wheel, his luck seems to change. Rump discovers he has a gift for spinning straw into gold. His best friend, Red Riding Hood, warns him that magic is dangerous, and she’s right. With each thread he spins, he weaves himself deeper into a curse.

To break the spell, Rump must go on a perilous quest, fighting off pixies, trolls, poison apples, and a wickedly foolish queen. The odds are against him, but with courage and friendship—and a cheeky sense of humor—he just might triumph in the end.

A Texas Bluebonnet finalist and winner of the ILA award for middle grade fiction, Rump is perfect for fans of Gail Carson Levine's Ella Enchanted or Adam Gidwitz's A Tale Dark and Grimm. And don't miss Liesl Shurtliff's other fairy tale retellings: Jack: The True Story of Jack and the Beanstalk and Red: The True Story of Red Riding Hood.

"A fresh riff on the Grimm Brothers' Rumpelstiltskin, told with wit from the impish point of view of the troublemaker himself." —People

It's been years since Jon Scieszka and Lane Smith introduced the world to the Cinderumpelstiltskin, Little Red Running Shorts, Chicken Licken, and the rest of the hilarious cast of characters in The Stinky Cheese Man. In this audio edition,...