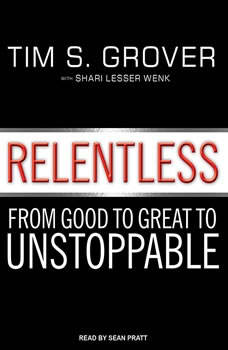 Relentless: From Good to Great to Unstoppable

Direct, blunt, and brutally honest, Tim S. Grover breaks down what it takes to be unstoppable: you keep going when everyone else is giving up, you thrive under pressure, and you never let your emotions make you weak. Tim details the essential traits shared by the most intense competitors and achievers in sports, business, and all walks of life. Relentless shows you how to trust your instincts and get in the Zone; how to control and adapt to any situation; how to find your opponent's weakness and attack. Grover gives you the same advice he gives his world-class clients—"don't think"—and shows you that anything is possible. Packed with previously untold stories and unparalleled insight into the psyches of the most successful and accomplished athletes of our time, Relentless shows you how even the best get better . . . and how you can too.