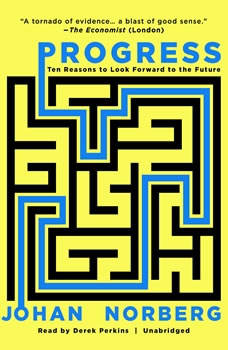 Progress: Ten Reasons to Look Forward to the Future

Its on the television, in the papers, and in our minds. Every day were bludgeoned by news of how bad everything isfinancial collapse, unemployment, growing poverty, environmental disasters, disease, hunger, war. But the rarely acknowledged reality is that our progress over the past few decades has been unprecedented. By almost any index you care to identify, things are markedly better now than they have ever been for almost everyone alive. Examining official data from the United Nations, World Bank, and World Health Organization, political commentator Johan Norberg traces how far we have come in tackling issues that define our species. While its true that not every problem has been solved, we do now have a good idea of the solutions and we know what it will take to see this progress continue. Dramatic, uplifting, and counter-intuitive, Progress is a call for optimism in our pessimistic, doom-laden world.