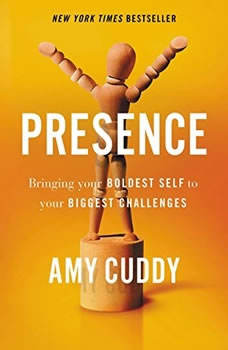 Presence: Bringing Your Boldest Self to Your Biggest Challenges

New York Times bestsellerWall Street Journal bestseller USA Today bestseller Publishers Weekly bestseller Forbes "15 Best Business Books of the Year"People "Book of the Week"AARP Editor's Pick "Presence feels at once concrete and inspiring, simple but ambitious--above all, truly powerful." -- New York Times Book Review Have you ever left a nerve-racking challenge and immediately wished for a do over? Maybe after a job interview, a performance, or a difficult conversation? The very moments that require us to be genuine and commanding can instead cause us to feel phony and powerless. Too often we approach our lives' biggest hurdles with dread, execute them with anxiety, and leave them with regret. By accessing our personal power, we can achieve "presence," the state in which we stop worrying about the impression we're making on others and instead adjust the impression we've been making on ourselves. As Harvard professor Amy Cuddy's revolutionary book reveals, we don't need to embark on a grand spiritual quest or complete an inner transformation to harness the power of presence. Instead, we need to nudge ourselves, moment by moment, by tweaking our body language, behavior, and mind-set in our day-to-day lives. Amy Cuddy has galvanized tens of millions of viewers around the world with her TED talk about "power poses." Now she presents the enthralling science underlying these and many other fascinating body-mind effects, and teaches us how to use simple techniques to liberate ourselves from fear in high-pressure moments, perform at our best, and connect with and empower others to do the same.Brilliantly researched, impassioned, and accessible, Presence is filled with stories of individuals who learned how to flourish during the stressful moments that once terrified them. Every reader will learn how to approach their biggest challenges with confidence instead of dread, and to leave them with satisfaction instead of regret.

This updated edition of the book that has changed millions of lives with its insights into the growth mindset can help you start the new year off right. After decades of research, world-renowned Stanford University psychologist Carol ...

"If you watched the entire election cycle and concluded that Trump was nothing but a lucky clown, you missed one of the most important perceptual shifts in the history of humankind. I'll fix that for you in this book."  Adams was one of the ear...

Co-founder and editor in chief of The Huffington Post Arianna Huffington shows how our cultural dismissal of sleep as time wasted compromises our health and our decision-making and undermines our work lives, our personal lives--and even our s...

The bestselling author of The Righteous Mind draws on philosophical wisdom and scientific research to show how the meaningful life is closer than you thinkThe Happiness Hypothesis is a book about ten Great Ideas. Each chapter is an attempt to savor...

INSTANT NEW YORK TIMES BESTSELLER"My new favorite book of all time." --Bill Gates If you think the world is coming to an end, think again: people are living longer, healthier, freer, and happier lives, and while our problems are formidable, the solu...

For the first time all three of Malcolm Gladwell's bestselling, groundbreaking audiobooks are available together in an "instant classic" box set at a value-price. THE TIPPING POINT: The tipping point is that magic moment when an idea, trend, or soci...

Malcolm Gladwell, the #1 bestselling author of The Tipping Point, Blink, Outliers, and What the Dog Saw, offers his most provocative---and dazzling---book yet.Three thousand years ago on a battlefield in ancient Palestine, a shepherd boy felled a m...