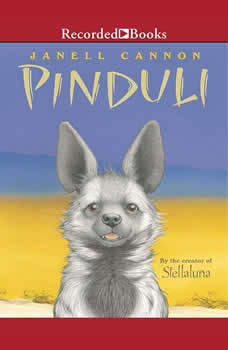 Pinduli's mama has always told her that she's the most beautiful hyena ever. But Dog, Lion, and Zebra don't think so. Why else would they make her feel so rotten about her big ears, her fuzzy mane, and her wiggly stripes? Poor Pinduli just wants to disappear. But then a case of mistaken identity lets her show the creatures of the African savanna how a few tiny words can create something enormous. From the creator of the best-selling Stellaluna comes this triumphant story about self-image, self-acceptance, and treating others with respect. Author bio: Janell Cannon's picture books have won many awards and are beloved around the world. She is the author and illustrator of Verdi, Crickwing, Pinduli, and the long-time bestselling classic Stellaluna. Born and raised in Minnesota, Ms. Cannon now lives in Southern California.

While out searching for food, fruit bat Stellaluna and her mother are attacked by a vicious owl. Stellaluna is separated from Mother Bat and taken in by a family of birds where she must put aside her bat habits to fit in with her new family. But one...