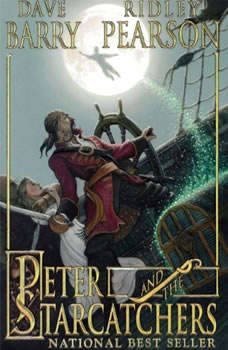 Peter and the Starcatchers

In an evocative and fast-paced adventure on the high seas and on a faraway island an orphan boy named Peter and his mysterious new friend, Molly, overcome bands of pirates and thieves in their quest to keep a fantastical secret safe and save the world from evil. Bestselling authors Dave Barry and Ridley Pearson have turned back the clock and revealed a wonderful story that precedes J. M. Barrie’s beloved Peter Pan. Peter and the Starcatchers is brimming with richly developed characters from the scary but somehow familiar Black Stache and the ferocious Mister Grin to the sweet but sophisticated Molly and the fearless Peter. Riveting adventure takes listeners on a journey from a harsh orphanage in old England to a treacherous sea in a decrepit old tub. Aboard the Never Land is a trunk that holds a magical substance with the power to change the fate of the world—just a sprinkle and wounds heal and just a dusting and people can fly.Towering seas and a violent storm are the backdrop for battles at sea. Bone-crushing waves eventually land our characters on Mollusk Island—where the action really heats up.

Peter and the Secret of Rundoon
Starcatchers Series #3