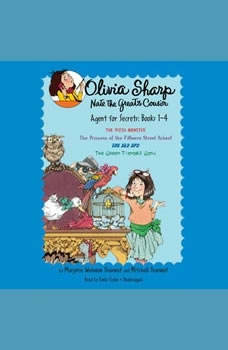 Olivia Sharp: Agent for Secrets: Books 1-4: The Pizza Monster; The Princess of the Fillmore Street School; The Sly Spy; The Green Toenails Gang

THE PIZZA MONSTER: Meet Olivia Sharp. She's bold. She's eager to help people. She's a special kind of detective. She's an agent for secrets. Duncan is Olivia's first case. He believes that the world is coming to an end. And he wants her help. So Olivia puts on her feather boa. Her driver brings the limo. Soon enough, Olivia knows just what to do. But how will fifty pizzas make Duncan happy?

THE PRINCESS OF FILLMORE STREET SCHOOL: Olivia Sharp is taking on a tough case. Her friend Desiree wants to run the Fillmore Street School. But Desiree is bossy. She wants everyone to stand up straight. And get a haircut. Desiree is driving all the kids crazy! Can Olivia help Desiree be the Princess of the Fillmore Street School--and keep the peace?

THE SLY SPY: Olivia Sharp always comes through to help those in need--especially her friends. But this time Olivia is the one with a problem. Another detective is covering up her ads with those of E.J.'s Spy Service and spoiling Olivia's business. He's also trying to guess what weird feathery birthday present Olivia is hiding in her apartment. Can Olivia fool the sly spy?

THE GREEN TOENAILS GANG: Olivia Sharp is one smart agent for secrets--which means she knows how to read between the lines. Olivia's best friend, Taffy Plimpton, has a problem. Taffy wants to join a secret club, but its members won't let her in. Why not? It's a secret that Olivia is determined to find out!

Get 5% off your total order by adding 3 or more audiobooks from Olivia Sharp: Agent for Secrets